People with Disability in the Australia Day Honours List

Australian readers will have enjoyed their Australia Day public holiday yesterday, a day of BBQs, listening to the JJJ Hottest 100 and generally enjoying the sunshine. International readers may not be aware of Australia Day and it's history, so you might like to read more about it here.
One important aspect of Australia Day is the Australia Day Honours List, in which Australians are commended for their contributions to the ongoing development of our nation.
In Australia, we have plenty of people with disability doing things to not only improve the lives of people with disability, but everyone else as well.  The people listed below have been honoured in the 2010 Australia Day Honours list.  Below is a short description of their achievements.
Professor Ron McCallum (AO) (Senior Australian of the Year) 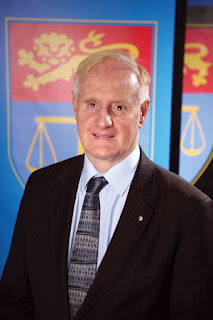 Professor McCallum received his award for his commitment to the rights of working people.  He was the first totally blind person to gain a full professorship in any Australian and New Zealand university.  He went on to become the dean of law at Sydney University, where he specialised in industrial law.  He is currently the chair on the monitoring committee for the United Nations Convention on the Rights of Persons with Disabilities.  He is also involved with 2RPH (Radio for the Print Handicapped) Vision Australia and the NSW Disability Council.
“Uncle” Lester Bostock
Uncle Lester received his award for services to the media, indigenous people and people with disability.  He was the first indigenous president of SBS radio and producer of radio programs.  He has been a board member of the Aboriginal Disability Network since its founding in 2002 and has been a member of People With Disability Australia since 1995, becoming a life member in 2005.
Joe Mannix
Joe received his award for services to the community through advocacy, social welfare and disability services.  He has served on the boards of organisations such as the Disability Discrimination Legal Centre, People With Disability Australia, Glebe Youth Services, Rozelle Neighbourhood Centre and the Tenants Union of NSW. Joe also tutored seniors computer programs in 2006.
(This information has been taken from www.gg.gov.au)
IDEAS NSW would like to offer congratulations to Professor McCallum, Uncle Lester Bostock and Joe Mannix!
Posted by IDEAS at 2:10 PM