Here's a couple of great organisations doing some amazing work in inclusive arts. By inclusive arts we mean it's for everybody - not just a program or project which is disability specific.


Shopfront is a contemporary arts centre – a cultural network and production co-operative where all young people under 25, regardless of background or ability can create themselves.

Below is a great dance piece they have produced called Zombie vs Bird:

Zombie vs Bird is an examination of the conflicts that arise at home and in the schoolyard, set within the rules and boundaries of a computer game.

Another great organisation doing some cool stuff is Bus Stop Films. Bus Stop Films has a focus on creating inclusion within the film industry. So far Bus Stop has been involved with creating three inclusive films, that have been screened both nationally and internationally, these films have also picked up a number of awards including the top gong at Tropfest 09.

People with mixed abilities fulfilled roles within the cast and crew of the films showcasing their talents and ability. The films also provided our participants the chance to be involved in film making at a professional standard.

Their latest work is a short film called The Interviewer, you can find out more about it at the film's website: http://www.theinterviewer.com.au.

Pretty cool don't you think? Have you come across any other companies / organisations doing great work in inclusive arts? Let us know!


Posted by IDEAS at 2:44 PM No comments: Links to this post

Disability not the Problem in an Accessible Society 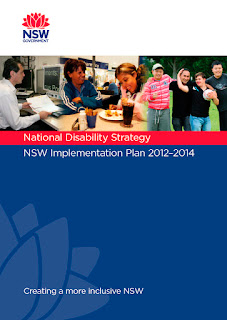 The above is the statement the NSW Government recently made when it released the "The National Disability Strategy NSW Implementation Plan 2012 -2014". A long title indeed.

The plan commits all areas of government to shift the structural and attitudinal barriers which impact on the lives of people with disability.


You can access a PDF version of the document here.

You can also access a HTML format here:
http://www.adhc.nsw.gov.au/about_us/strategies/national_disability_strategy/nds_nsw_implementation_plan

Posted by IDEAS at 7:30 AM No comments: Links to this post 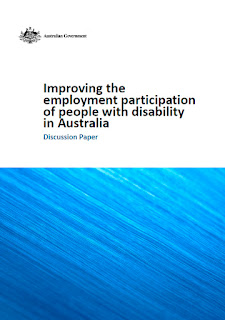 The discussion paper looks at the best ways to:

The Government is asking for feedback and submissions on the paper, and would like to hear from:

You can read the paper here in pdf format

Or for a RTF format you can visit the Department of Employment and Workplace Relations' website here.

What are some ideas you think could help to get more people with disability into the workforce?

Posted by IDEAS at 10:38 AM No comments: Links to this post

The National Disability Awards are part of the International Day of People with Disability celebrations which are held 3 December each year.

Below we've listed the recipients in each catergory, who received their awards from Senator the Hon Jan McLucas last week. You can also read about what they have achieved.

Rhonda played a key role in bringing together people with disability, carers and providers of disability services to campaign for change. She spearheaded the establishment of the National

Disability and Carer Alliance, and with the Alliance has been a driving force behind the National Disability Insurance Scheme.

Minister’s Award for Excellence in Disability Reform – Michael Small, Sandy Bay, Tasmania and Samantha Jenkinson, Karrinyup, Western Australia
Throughout his lengthy career, Michael has dedicated himself to advocating for the rights of people with disability, particularly through the development of government policy and accessibility standards. Michael was closely involved in developing standards for accessible public transport and banking services, led negotiations to improve cinema and television captioning, and now runs an access consultancy that focuses on making practical changes to improve the rights of people with disability and their families.

Samantha has dedicated her professional life to fighting for disability reform in Western Australia and across the country. Samantha’s many achievements include her work on a number of projects to increase the choice and control of people with disability, participation on a number of ministerial advisory committees, and her contribution to the state’s Count Me In: Disability Future Directions strategy.

Emerging Leaders Award – Gerard O’Dwyer, Guildford, New South Wales
As an actor with Down Syndrome, Gerard is using his profile to challenge entrenched stereotypes, particularly of people with an intellectual disability. His work includes dramatic performances in film and television, including his role in the film Be My Brother, for which he won Best Male Actor at the 2009 Sydney Tropfest Film Festival. Gerard is currently an ambassador for Karelle Life Enrichment Service, a provider of services to people with intellectual disability.

Excellence in Improving Social Participation Award – The Captioning Studio, Adelaide, South Australia and Australian Communication Exchange, Stones Corner, Queensland.
From the Sydney Opera House to the Arts Centre in Melbourne, The Captioning Studio’s innovative, accessible technologies and services are helping people with hearing impairment to better access performing arts. An example of the studio’s innovations is the world-first technology GoTheatrical, which enables people who are deaf or hearing impaired to enjoy live theatre by accessing live captions on their mobile devices, such as smart phones and tablets.

Australian Communication Exchange is considered Australia’s leading service provider for the deaf, hearing and speech-impaired communities. Examples of its range of technologically advanced services include silent tweets—a smart phone app that allows users to post and receive important public announcements—and its new web captioned telephony service, which provides live captioning for telephone calls that can be accessed from a computer or smart phone over the internet.

Excellence in Improving Employment Opportunities Award – Telstra Corporation
Telstra Corporation is expanding its successful Supported Workforce Program, which currently partners with 13 Australian Disability Enterprises (ADEs) nationwide to provide meaningful and ongoing employment for more than 200 people with disability. With a demonstrated commitment to delivering accessible services to Australians with disability for many years, Telstra was the first major Australian corporation to develop a Disability Action Plan in 1996.

Excellence in Accessible Communities Award – Safe Futures Foundation, Eastern Region, Victoria
Safe Futures Foundation delivers early intervention, emergency and crisis support, as well as accommodation for women and children with disability who are experiencing family violence. The organisation fills a vital gap in the area of family violence and safety, and acts across the domestic violence and disability sectors to raise awareness of the risks faced by women with disability.

Excellence in Improving Personal and Community Support Award – Mary D’Elia, Hobart, Tasmania
In her role as State Operations Manager, Family and Community Services, for Baptcare, Mary D’Elia has played a pivotal role in policy reforms to improve the lives of Tasmanians living with disability. She has worked extensively with the Tasmanian Government to help develop and deliver the state’s Gateway Services – a single entry point for consumers to family and disability services in Tasmania.

Excellence in Improving Health Outcomes Award – Family Planning Queensland, Fortitude Valley
Family Planning Queensland in Fortitude Valley were awarded for their commitment to ensuring people with disability have access to the information and resources they need to make informed choices about their sexuality and reproductive health. The organisation also delivers positive messages to people with disability about their sexuality, sexual development and safe sex.

Excellence in Improving Education Outcomes Award – Geoffrey Warren, Clifton Hill
As the Principal of Clifton Hill Primary School for the past 23 years, Geoffrey’s extraordinary leadership has ensured inclusive educational practices have been embedded across every aspect of school life. A culture of respect and the expectation of achievement is a striking characteristic of the entire school community, and the judges were impressed by Geoffrey’s dedication to creating a collaborative culture. The school consults regularly with families and allied health professionals so that it can benefit from the extensive knowledge and expertise of all parties.

Visit the IPwD website to find out more.
Posted by IDEAS at 2:19 PM No comments: Links to this post