One Month Before Heartbreak

Today’s post is written by Carl Thompson who is the man behind the fantastic blog Working At Perfect. Carl is from Victoria, Australia, and describes himself as “Wheelchair User (Cripple), Writer, Student, Music/Audio Nerd, Gamer and Cricket Tragic”. He writes regularly for the new ABC Ramp Up site and for DiVine Victoria.

I first came upon Working at Perfect a few weeks ago and since then I’ve enjoyed reading Carl’s thoughtful and humorous posts, and I am really happy that he will be contributing to DisCo over the coming months. 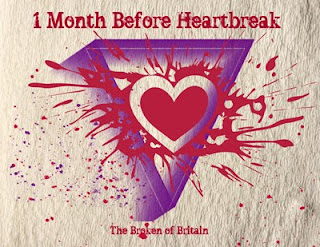 A little background to today’s post... Have you heard about One Month Before Heartbreak? It’s a Broken of Britain event organised by some UK bloggers including Emma Crees who as you will remember has guest posted here before. One Month Before Heartbreak is a “blogswarm” event, similar to Blogging Against Disablism Day, involving people getting together to blog about a subject or theme during a specified time period. The “swarm” of blog posts should attract attention and raise awareness.


So why is it called One Month Before Heartbreak? On Emma Crees’ blog A Writer in a Wheelchair, in the United Kingdom there is an ongoing discussion about DLA reform ends on 14th February 2011. Emma explains that 14 February is “Valentine’s Day, traditionally a day for love but which could severely affect disabled people if DLA reforms aren’t handled correctly. We need to ensure that our voices are heard. We’re holding this event a month before the consultation ends in order to raise awareness of the consultation and give people to chance to respond to it if they wish. Bendy Girl came up with the name of this event.”

I hope you enjoy Carl's post. It's fantastic to see how much unity One Month Before Heartbreak is demonstrating both in the UK and across the world. (Thanks Carl!)

Luckily for me, I'm not an English citizen, and I'm not facing drastic transformational change in every facet of my life in the coming months. I have stability, I know that I am eligible for my much-needed disability support pension payments, I know when I will be paid and how much I will receive. For me this is clear. Unfortunately, for English citizens under the Conservative government led by David Cameron, all people with a disability, their carers, families and friends will be profoundly affected by a proposed drastic change in the degree of financial support they will receive.

As mentioned prior, I'm not an English citizen. I don't claim to know the ins and outs of their welfare system or their political structure. Here I will not waste words trying to explain to the letter what the changes will be - it would be much wiser to read the ‘One Month Before Heartbreak’ entries written by actual British citizens if this information is what you seek. What I do know however, is that English men, women and children are facing the repercussions of the implementation of multiple government policy changes that aim to pull their country out of a recession - seemingly a noble cause.


The question is how should this be done? Well, according to many governments around the world, the answer is by introducing spending cuts. Cutting wasteful spending and cutting discretionary services are two common methods of tightening a nation's budget. So let's think about that for a moment, and try to relate it to be problem this whole piece is about. In what conceivable way can money that is directed to supporting millions of Britons living with a disability be deemed wasteful or discretionary? This money is used for these people to survive, and survive being the operative word - This money is not surplus to their needs, it's barely enough for them to live day by day. So why is the government even considering making regressive changes in this ever so important area? I don't know the answer, if you do, please tell me.

So let's assume the money has to be cut from somewhere and inevitably someone has to lose out - we can't all be winners now can we? But doesn't it make sense that the government should implement cuts, or perhaps raise taxes on those who can actually afford to cope with the changes? Admittedly, I'm not an economist, but I'm also definitely not a socialist. I do believe in commonsense though, and the slashing of payments that are vital for keeping people with a disability afloat does not make any sense in my mind - none at all.
But wait! On the other hand, it does make sense – if you have to disadvantage someone, if you have to cut money from an interest group somehow, why not cut it from those that the government perceives will make the least amount of noise? How about we make spending cuts affecting those who won't be able to fight back or make a fuss? People in the deaf community won't hear about the cuts on the radio and those with a vision impairment may not be able to read about them in the morning newspaper. Users of electric wheelchairs would not be able to climb the steps of Parliament house to protest their governments' changes and the bedridden are of no risk of protesting in the streets. Now perhaps, the cruel motives behind these cuts are starting to become clear.
There is hope however, and that is the Internet. To be honest, if their archaic policies are anything to go by I'm not sure the Conservative party in Britain quite have a grasp on how the Internet works just yet, but hopefully they will find out soon enough. I'm told that I personally spend too much time online, and many of my online friends with a disability have similar Internet habits. So what does this mean? People with a disability can protest, we can type - be it via Voice recognition or otherwise. We need to use our strengths and rally together as one.
The Conservative party of Britain will realise that people with a disability do indeed have a voice, an opinion, and maybe more importantly, a vote
Posted by IDEAS at 8:53 AM