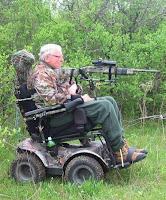 When I woke up this morning at a quarter of six the temperature outside was 27°. Even though it is May 10th you have to expect the possibility of this kind of temperature when you live in northern New York. My nurse arrived around six and the day began. I was ready to roll a little after eight o'clock but was delayed because of a problem my nurse had loading my shotgun. Bundled up in camouflage, my wife and I finally headed out of the house. I'm fortunate to be able to hunt across the street on a large area of abandoned farm land. I motored down the driveway, across a field, down an abandoned road and drove into the field to the place where I was going to hunt. At the edge of the field I backed into an area of small trees and brush. One must blend in with the surroundings because turkeys have excellent vision and can spot anything out of place. Marge helped me with some final adjustments, covered my head with camouflage netting and left. Fifteen or twenty minutes after she left intermittently I began calling the turkeys. Turkeys call back and forth to locate each other during the mating season. Although it was cold with a brisk wind, it was a beautiful sun shiny day. Back in the hedgerow there was little wind and it wasn't long before I could feel the warm rays of sun on my face. 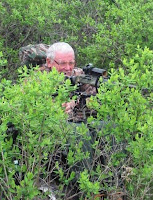 After a while I became aware of a bird jumping around from branch to branch. A minute or two later it landed on my shotgun barrel and stayed for about 30 seconds. It was Black-capped Chickadee. They are cute and entertaining little birds. I glanced at its feet gripping the barrel of the shotgun. How can anything be so delicate? Even though we can have brutal winters, Chickadees are year-round residents. After it flew off I called a couple more times. Slowly my eyes began to close and I nodded off in the warm sunshine. When I awoke again the grass in the field was bending in the wind, as were the trees and bushes directly across from me, every shade of green rocking in the wind. I heard the raucous call of a crow. It kept repeating and each time after it was done I listened intensely for a gobble that never came. Often in the early spring during the mating season male turkeys will gobble when crows are calling. Again I became aware of movement in the bushes around me. This time it was a pair of Wood Thrushes who were also involved with the spring mating ritual. They have one of the most beautiful calls of the early spring morning but these two had other things on their mind.
Sitting in the warm sunshine calling, nodding and watching, the morning passed quickly. I soon heard my wife's voice as she arrived to walk me home. The hunting time ends at noon each day and Marge insists on walking me back home. Tomorrow is another day. Oh, by the way, I didn't see or hear any turkeys, but it was only noon and I had already had a quality day. At one point during my recovery I never thought I would enjoy a day like this again.
Posted by IDEAS at 2:10 AM