The Racist on the Train

Thanks to Carl for his latest post... oh the perils of public transport!

People on trains are often a source of entertainment, insight, disgust and intrigue; sometimes all at once. They also present opportunities; I landed one of my jobs from a chance meeting on a train. Yet at the same time, I was also mistaken for a woman by a 13-year-old homeless boy who wanted my wallet. Passengers on trains also enjoy dishing out backhanded compliments, especially to those with a disability. I wrote about one such encounter in this blog post, and recently I had another run in with a passenger, yet this time the situation was even more bizarre.

Encounters on trains almost always start innocently enough; I wait at the front carriage, make eye contact with the driver, and watch them slam the ramp down as they sigh simultaneously. Then, as any modern man does, I try to avoid people and find a secluded corner from which I can fiddle with my smart phone. I must be an affable chap, as strangers often strike up a conversation with me. It's normally old men though, so maybe I should be worried instead of self-satisfied? Regardless, an old gentleman started talking to me, you know the stuff, everyday pleasantries. It wasn't a conversation that glued me to my seat (bad disability joke), but it was pleasant enough. The man took out his wallet and showed me a picture of his daughter. I feigned a genuine smile, which he bought. Then the conversation began to peter out as my enthusiasm waned. Then there was a pause, a pause five minutes long. It was sadly broken by this unpleasant non sequitur;
“Too many Muslims these days, aren't there?!” Now that is definitely a question no one wants to be asked, especially by a stranger in the confines of a train carriage. If I was drunk, I probably would have sworn at him. If I was exhausted I probably would have nodded, just to end the conversation. Isn't it funny how your morals (or at least an outward expression of your morals) can easily be compromised depending on the state of mind and body? Anyway, I wasn't drunk, nor was I tired, so my response was a simple “Pardon?” 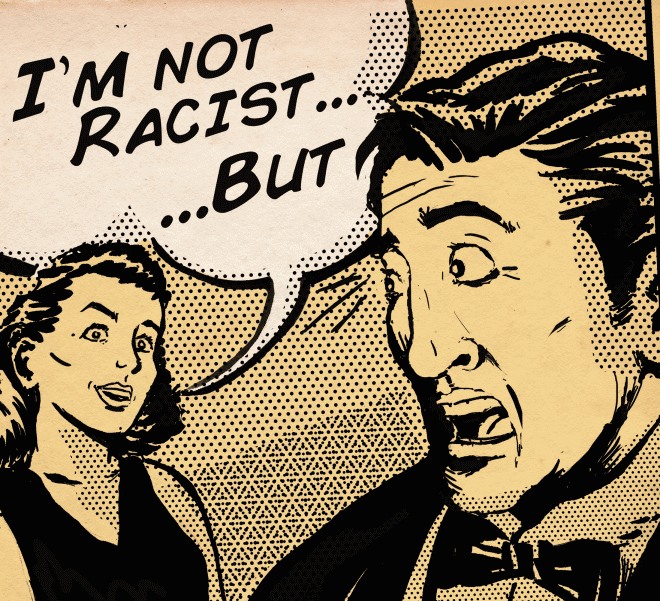 “Too many Muslims! You know, coming on the boats and taking our jobs.” He pointed to the article on the front page of the Herald Sun he was holding, as I let out a sigh and thought of this:


I asked, “Did they take your job?” He replied, “No, I don't work.” Becoming increasingly agitated, I queried, “Did they take your daughter's job?” Again, he replied, “No, she doesn't work. They still take our jobs though!”
I didn't have the energy to reply, so I glanced down at my phone and pretended to be busy. There was another pause, until the silence was again broken by another gem of a statement;
“They also rape and kill women!” By this point I was becoming really annoyed, yet at the same time I honestly couldn't be bothered dealing with people so out of touch with reality. Again, all I could reply with was an exhausted “Pardon?” Looking like I needed some convincing, he stood up, pointed to an article in his paper and exclaimed, “The Muslims! They'll kill all our women!”
“What makes you say that?” I replied, as the racist pointed to the article in the paper, “This one, this one killed his wife!” I tried to explain that it was horrible, yet it happened in Saudi Arabia, not Australia, and the man wasn't an asylum seeker. Further still, it was one man who committed the atrocity, not the entire population. Perhaps unsurprisingly, my attempts at logic failed to convince the racist, as he continued to spout incoherent diatribe.
You mightn't believe me, but the conversation turned stranger still. I was treated to a nonsensical lecture about childhood memories, pertaining to various topics, including slug guns, icy poles, and how everything was cheaper back in his day compared to now. Then there was a quick rant about how Caucasians have bigger brains than people from Africa, and that the Muslim women who wear full headdress use it as a convenient excuse to shoplift from milk bars and banks, all to avoid detection.
Again, I'm not making this up. In fact, I don't think my imagination stretches that far into the depths of madness.
Luckily for me, I arrived at my stop, and as the train driver once again slammed down the ramp to allow me a swift exit, the racist wished me goodbye, to which I replied, “You’re an idiot, have a good day.”
http://www.workingatperfect.com/
Posted by IDEAS at 12:05 PM