After contacting the Coordinator of the First Flight Crew I have come back with a prompt response from Ms Alison Richardson herself!!! Not only did she offer a bit of information about the fantastic group, but she also offered some wonderful pictures to be put on my blog. Special mention to the verse offered by Ana Nguyen at the end of the post. I highly recommend you check them our yourselves!

Alison Richardson
First Flight Crew are an eight piece hip hop outfit from Sydney managed Accessible Arts’ Creative Program Coordinator for Western Sydney, Alison Richardson. “First Flight Crew is about reaching new audiences outside of the disability sector & bringing to them an explosion of beat boxing, rap, dance & projections exposing the talent an spunk of this unique group” says Alison.
The crew are taught by legendary Aussie hip hop artist, Morganics & sprung out of their strong desire to dance, create original music, rap and beat box. The crew was formed in late 2008 & have performed from Bondi to Blacktown including Sydney’s largest Hip Hop festival, Platform 3 at CarriageWorks, Hip Hop projections 5 at Parramatta Riverside & as part of Powerhouse Museum’s recent 80s exhibition.
First Flight Crew member, Ana Nguyen says of being in the crew, “We want tell stories & we want to give the voiceless a chance to say so. We want to do something that will stand out from the crowd. We want to give the crowd the best impression as possible.”
For more information on the First Flight Crew contact Alison on arichardson@aarts.net.au or call 9251 6499 (ext112) or check out the Facebook site or website. 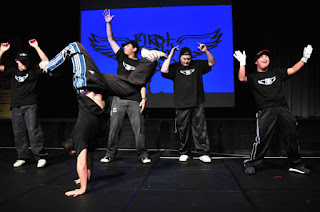 More from Ana:
I hope that this is a way to educate others in some way
And this proves that we can do anything.
We'll break the rules and the stereotypes...
And by being part of the First Flight Crew,
I'm going to prove the critics wrong
That yes, we can do anything.
This is the record of the truth, I can tell you to be honest.