The Man on the Melbourne Tram

Last week a Facebook user posted a photo of a man on a Melbourne tram and detailed her encounter with him as she saw it. The man was accused of being intimidating and threatening towards young women and more specifically young women of Asian decent. He was accused of being a drug user and called predatory. The post attracted in excess of 80,000 likes and was shared more than 10,000 times.  Immediately comments appeared under the post that called for various violent acts to be perpetrated against the man in retaliation. Among the frenzy of people tutting and mindlessly sharing the story was a prominent feminist activist and author, Clementine Ford, someone who does not shy away from publicly revealing the faces and names of alleged perpetrators. Hastags such as #silentnomore and #fightlikeagirl were added to the story and assisted in its circulation. The story was also picked up by the mainstream media and was published by online news outlets. Several hours after the story broke people who knew the man contacted the original poster, privately and publicly, and advised her that the man had Autism and often asks for high-fives on the tram (this has not been verified). It was suggested that he was not a violent person and was well known to at least some tram users. The post was not removed by the poster until she began to receive threats via private message. The threats against the poster were not necessary however it was also not necessary for her to post an identifying image of the man on a public forum with inflammatory remarks attached.

So why? Why was this story shared en masse without any questions being raised about the veracity of her claims? And why, despite his face being shared 10,000 times, was this man all but invisible to the poster and the eager social media sharers?

Upon first reading the article it occurred to me that the man was socially inept; he hadn't physically grabbed anyone nor had he verbally abused anyone. Lets have a look at the way the interaction is written about:

Both of these examples have the female poster extrapolating a malicious intent from a few socially awkward encounters. I do not deny that the women on the tram possibly felt intimidated and frightened. I do not doubt for a second that the female poster believed that this man was behaving inappropriately. What I do doubt is our ability as a society to discuss and deal with issues relating to disability.

The Daily Mail published a follow up article on the 10th October 2016 which reveals that the man on the tram has Autism. Doing a search of Facebook hash tags for the original posters name reveals a handful of admissions from those who shared the original article expressing regret that they hadn't looked into it more thoroughly before sharing. What is absent though is commentary from the original poster and high profile sharers like Clementine Ford.

Why are we afraid to talk about disability?

The behaviours exhibited by the man on the tram may have intimidated the women involved but how do we address that? There is an absence of dialogue surrounding people with disability; we don't talk about disability - we hide it and ignore it.

"Mentally ill people were popularly considered ‘dangerous’ and were confined and separated from the broader society. The location of asylums away from large population centres reflected this principle. Mental illness was out of sight, and mostly out of mind" 1

The segregation of those with mental illness and intellectual disability referred to above is not ancient history. In the 1960s the global civil rights movement led to the growth of advocacy for those who had been institutionalised; 'Mental Hospitals' and 'Asylums' were renamed and the Mental Health Act was established in 1962. It wasn't until 1992 with the establishment of the National Mental Health Policy that reform began. This policy was followed by the Report of the National Inquiry into the Human Rights of People With Mental Illness which found that, unsurprisingly, "People affected by mental illness are among the most vulnerable and disadvantaged in our community. They suffer from widespread systemic discrimination and are consistently denied the rights and services to which they are entitled."2

Currently there are only a handful of Psychiatric Institutions still operating in Australia and the general consensus among those treating patients is that integration in the community is beneficial to those suffering from mental illness or intellectual disability. I would also add that integration is also of benefit to the wider community especially within the school environment; encountering difference on a daily basis imparts an understanding and an acceptance that theoretical ethics can not. Perhaps if the original poster had encountered similar Autistic behaviours previously she may have reacted differently? Perhaps if society was more aware of disability in general we may have not seen these vicious social media attacks on an unnamed man? 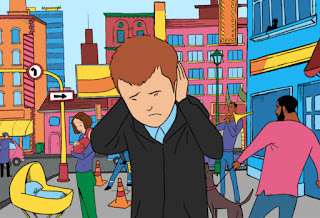 Perhaps a better way to deal with this would have been to speak directly to the tram driver or having taken the picture she could have spoken to the police about the incident. The police may have been aware of the man if he is a frequent traveller and may have been able to contact him or his family to deal with the issue head on. They may have also been able to direct her to resources that could assist in the future should she encounter him again. No one has the right to make someone feel unsafe, however when we are dealing with mental illness or intellectual disability we can not expect that the same awareness around personal space for example exists.

We, as a community, need to educate ourselves about disability. We need to see disability as part of OUR lives even if we may not necessarily be affected by a disability ourselves. Maybe then we will be able to deal with incidences like this in a way that doesn't result in public shaming and torrents of abuse.

*** Since writing this article I have noticed a few anti-feminist websites and bloggers posting equally vicious and awful things to social media about the original poster and others who shared the post. I don't blame the woman involved for being frightened nor do I blame 'feminism'; what is lacking is an acceptable and inclusive dialogue about disability - nothing about us, without us!


If you or anyone you know is affected by challenging behaviours in children or adults who are on the Autism Spectrum you may find the following resources helpful:

2. Report of the National Inquiry into the Human Rights of People With Mental Illness