Travels Around My House

Thanks to Bruce for stories of his latest antics:
The essence of dealing with disability is to stay flexible.

With this in mind and after a fairly exhaustive reassessment of my current capabilities, I have decided to re-name my column again (from ‘Bruce Travels the World’, to ‘New Zealand is Far Enough’ then ‘Bruce At Large in Oz’, then ‘Travels Around My House and Garden’).
In this article I propose to recount just one day from my adventures at home and to deduce some useful lessons. . .
An eventful morning had developed since discovering my right shoe was awash resulting from a manufacturing fault in my legbag (or my failing to properly close the tap).
I beavered off to the laundry and began filling a bucket with hot water into which I added some No Names disinfectant and my shoe.  Trying to enhance my productivity, while the bucket was filling I backed out of the laundry to replace the disinfectant to its spot in the corridor.  In doing so, the back of my electric wheelchair became entangled in our (formerly) mobile clothes rack.
Unfortunately it was wedged behind my left arm, which is less than useless, and trying to twist around in my chair only caused me to almost slide to the floor- and all of the clothes on the rack to fall there. 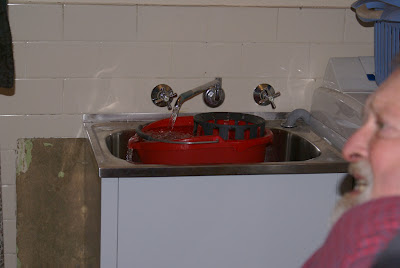 On looking back to the laundry, I noticed the bucket was now overflowing and the clever stopper in the laundry tub had closed with the weight of the bucket on it.  Frantic efforts failed to dislodge the rack and turning around with it attached to me in the narrow corridor was not an option. 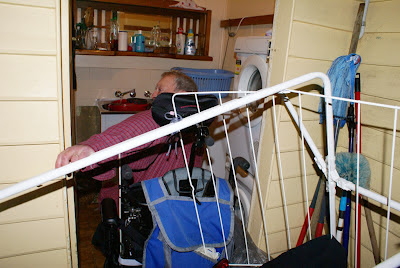 And now the laundry tub was half full of hot water.
I tried to drive forward into the laundry, but the rack had tilted sideways and stopped me at the doorway.  I could see the water in the tub lapping ever higher and I could do nothing to get the confounding metal contraption off me.  So I backed up a little, then rammed at the door as fast as I could go, leaving the drying rack, what remained of the washing  and parts of the door frame in a mangled mess on the floor.
I reached the tub about 2 seconds before it overflowed.
After a few hours reviewing events and catching my breath I was ready again for the fray and decided to wheel off to my bedroom to get some important documents (now sodden and illegible), which were in the bottom drawer of my bedside table.
At this point I discovered the forward tipping limits of my chair- at an inconvenient time and in an unfortunate place. 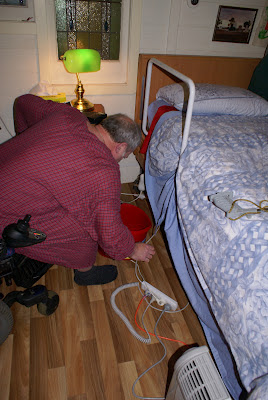 Beside the bedside table I had placed a bucket of disinfecting solution, which I now slid into head first, splitting it open and  causing the contents to flood across the floor (the bucket’s, not my head’s) soaking me thoroughly.
From my new position lying on the floor, I could see the tide of antiseptic solution flowing steadily toward the power board laying on its side under my bed.  To switch off the power before the liquid reached the board and I became part of an electrical circuit, was obviously a matter of urgency.
Some time previously though, I had cunningly relocated the switch higher up the wall so that it was more easily accessible from my wheelchair.  But completely inaccessible to me now,
And yet, ever vigilant, I always have my “Inspector Gadget” claw handily resting against the bedside table.
Except I had just put it up on the bed so I could open the drawer . . .
To finally reach it from my turtle-like position on the floor involved some extreme effort and not inconsiderable pain.  But eventually I grabbed it and with trembling grip managed to flick the switch off.  I fell back exhausted, my head turning to the side.
From where I could see the liquid tide had around 2 seconds to go before reaching the power board.
Lessons Learnt
When my wife got home from work that evening and asked, “What have you got done today?”, I had to admit
“Not a lot”.
But I like to think I did at least learn some useful lessons;
and
P.S.  Even though the photos were taken after the event, they involved almost as much trauma as the original.
Posted by IDEAS at 4:41 PM