So you’ve probably heard a bit this week about the National Disability Insurance Scheme (or NDIS for short).

On Monday thousands of people around the country joined forces and attended rallies in Sydney, Melbourne, Perth, Adelaide, Hobart and Brisbane – all making the point of ‘Every Australian Counts’. This has been a campaign running for over 18 months now calling on the Government to overhaul the current disability system. 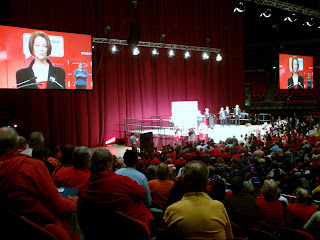 PM Gillard also announced the Government will deliver the roll out of this scheme a year ahead of schedule and the scheme will start to roll out next year in 4 locations (these haven’t been named yet).

The Government’s media release states this initial roll out will see about 10,000 people with disability start to receive support under the new system. Read the media release here

So what now? It may seem like we have ‘won’ and in many ways it is a big potential win for all those people who have literally suffered and continue to suffer under a system that just doesn’t work.

However, now is not the time for us to take our foot off the pedal, especially if you think about some of the comments made by Opposition Leader Tony Abbott not too long ago at the National Press Club in February. His sentiments were that the NDIS was only a priority if the budget was in surplus.
More recently this week he has pledged bi-partisan support for the NDIS, however there are still questions being raised from within his own cabinet (Shadow Treasurer Joe Hockey) around how the NDIS might be paid for.  He says Australian families will find it really hard to pay for an NDIS.

Really? Are we still trying to win political points over an issue that boils down to people with disability in this country having their basic human rights denied?

The Every Australian Counts campaign has recently changed to a harder hitting message asking such questions as ‘Which country expects a child to wait more than 2 years for a wheelchair?’ or ‘Which country expects someone to live with only 2 showers a week?’. The answer of course is our country – Australia. The supposedly lucky country – well it seems only lucky for some.

Perhaps Joe Hockey might like to hit the streets and ask ‘Australian families’ how hard it might be to refuse giving a dollar or two to a kid who has outgrown their wheelchair.  Or refusing a dollar or two to the countless other desperate situations people with disability and their families face each and every day of their lives. Surely as Australians we can’t be that selfish, give us more credit Joe.

So do we really care how we pay for the NDIS? Some things shouldn’t have a price tag - surely basic human rights are one of these things.

Check out the continuing campaign at www.everyaustraliancounts.com.au