Travellers Aid Allows Me to Work and Get Drunk

No accessible toilet at work?! Luckily for Carl and many others in Melbourne, there's a solution...

Travellers Aid in the city of Melbourne is a unique organisation. They don't fall neatly into any existing charity structures, nor do they aim to run at a profit. So what exactly do they do? Lots.
I spoke about Travellers Aid briefly inthis post, but there is much more to be said about the organisation.
Travellers Aid operates out of two main locations, one at Southern Cross Station, and the other at Flinders Street Station. Both train stations are the largest in Melbourne, and thus they both have an enormously large and diverse make-up of people passing through.
Perhaps intuitively, Travellers Aid as an organisation attempts to cater to pretty much everyone. Whether it is tourists looking for simple directions, the elderly requiring assistance with transport, people escaping from abuse or domestic violence, and in my case particularly - those seeking personal care assistance. 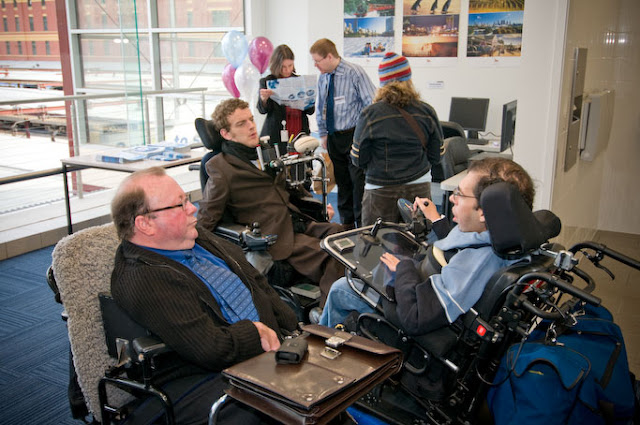 I've written about personal care at ABC RampUp, and it is an issue that frustrates me to no end. So last year, when I found out that an organisation in the CBD of Melbourne provides public, free personal care without needing to book in advance, I was pretty impressed.
I found out that Travellers Aid provided free personal care due to some research I did when contemplating starting paid employment through an internship program at my university.
Unfortunately, I can't work wherever I want; location, space and funding are all major considerations of mine. In polite terms, I need personal care assistance and facilities at my potential workplace. In not so polite terms, I need a place to do a wee, and someone to give me a hand.
And how many workplaces have completely accessible facilities, including an electric hoist? And I'm not just talking about your standard accessible toilet, I'm talking about the full works. The answer is none, at least none that I could find. And yes, maybe I could rant and rave, complaining about discrimination and the like. But it was only for work experience, and if I make too much of a fuss then they might not hire me! Even if they do, they might just make me the guy who does the coffee runs.
I had an epiphany; enter Travellers Aid! I worked out that I could conceivably work anywhere centrally in the city of Melbourne, and make a trip to Travellers Aid whenever I needed to do the proverbial business.
In short, I went for the job and I got it! Hooray!
Was the personal care regime with Travellers Aid perfect? Definitely not, it took a good 15 minutes at full pace to reach the facilities from my work - through wind, the rain and the heat. There were also often queues, I hate queues.
But was it bad? Not in the slightest. The staff were great, all of them. Going to the toilet was really quite a quick and painless process, and that is just how it should be.
But let's think about this for a moment? I have said it already, but I physically could not work for more than a couple of hours without having a facility such as Travellers Aid nearby. If that was the case, and Travellers Aid didn't exist, it wouldn't have been worth applying for the job. As such, I now wouldn't have seven months work experience at a prestigious organisation under my belt. I wouldn't have some key references, I'd be a couple of thousand dollars poorer, and perhaps most importantly, I wouldn't have met many great people who have opened some pretty large doors for me.
What I am trying to say is this, without Travellers Aid I would have much less work experience, and much less life experience.
I've been talking about Travellers Aid in the context of work. But life isn't all work, and the city of Melbourne isn't all work. Travellers Aid often stays open quite late, and is thus also a social enabler in a context different to work.
Travellers Aid allows me to get very jolly and quite drunk in the city - all without worrying that my bladder will explode. I know they can't exactly use what I have just said on promotional materials, but it's definitely another great aspect of the organisation. It enables us disabled folk to leave the house and have a good time for once. Beware people; we are in your streets and in your towns, drinking your beer and eating your food!
Why am I telling you about Travellers Aid now? Well, I was asked to help them out with a couple of promotional activities, but as they say, that's a story for another time.
Posted by IDEAS at 9:54 AM